From Copenhagen's origin as a hamlet which hardly anyone had ever heard of to a position as the dazzling capital of the Danish Empire, and to its current position as one of the world's most talked about as well as sung of cities is a colourful history. Copenhagen is Scandinavia's largest city and its history goes way back. The reigning monarch Queen Margrethe II can trace her ancestry back to the Viking Age and that makes Denmark the world's oldest kingdom. Among cobbled squares, narrow streets and old buil 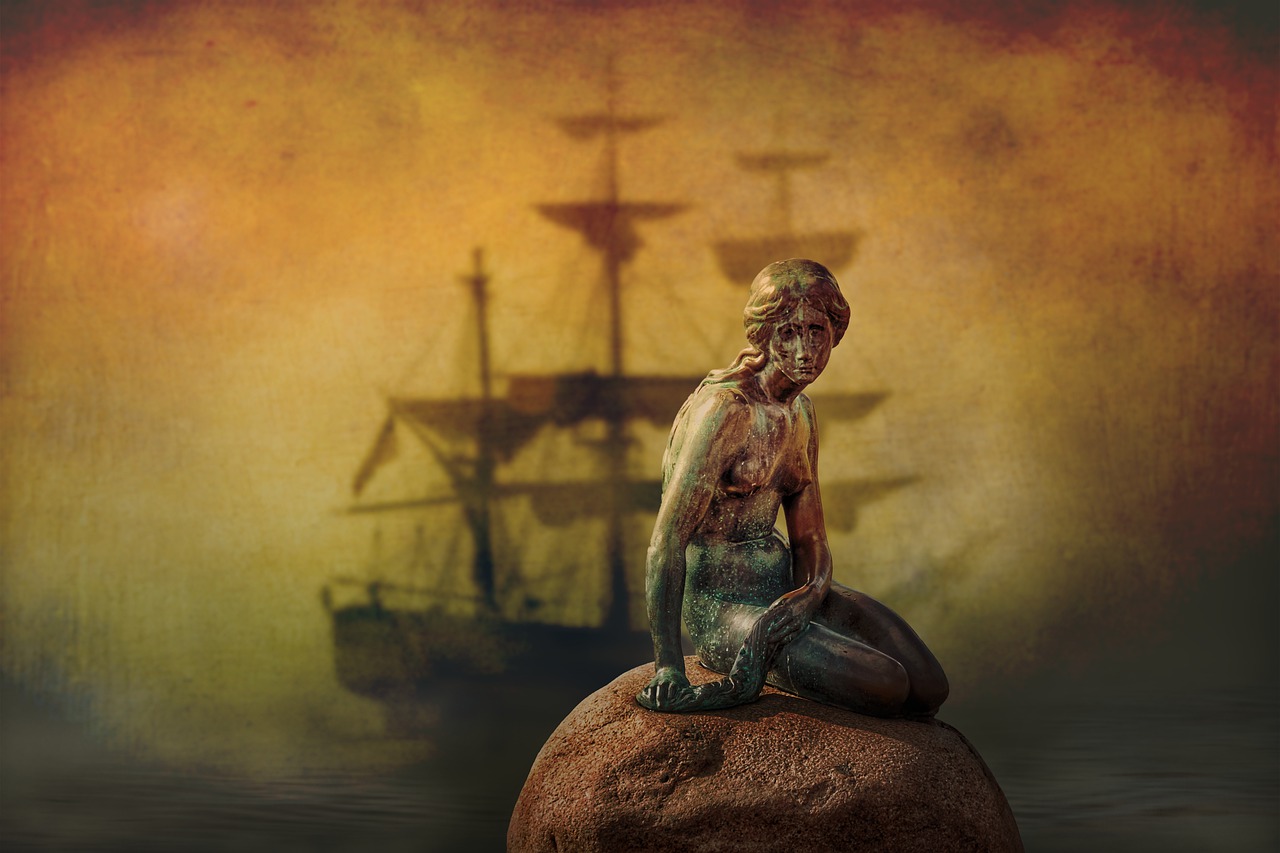 The birth of Copenhagen

From a small fishing village that hardly anyone had ever heard of to a position as the dazzling capital of the Danish Empire and to its current position as one of the world's most talked about as well as sung of cities is a colourful history.

There are evidence that Copenhagen existed as a settlement more than 6,000 years ago, but its first written record dates 1043 AC.

Copenhagen, in those days called "Havn", meaning the harbour, was of little strategic or political importance. Most of the people in "Havn" earned their daily bread by fishing for the plentiful herring in the Øresund. In the next two centuries fishing and trading turned the small fishing village into a flourishing town. And in 1343 King Valdemar Atterdag made Copenhagen the capital of Denmark - today the seat of the government and the hometown of the Danish royal family.

The Copenhagen region is a Viking area. Over a period of 300 years, from 750 to 1050, the Vikings set sails for the then far-away countries like Greenland, North Africa, the Caspian Sea and North America. Copenhagen was an important outpost from where the Vikings set out on their voyages in Europe and the rest of the world.

As well as dramatically affecting the course of European history, the Vikings also left behind many indelible traces on the Danish landscape. A 35 minutes train ride west of Copenhagen you'll find The Viking Ship Museum in Roskilde. At the boatyard it is possible to follow shipbuilders working on the reconstruction of Viking warships. The ships are exhibited and their story is told with models, posters and films in the Exhibition Hall.

If we go back a thousand years, Copenhagen was still a humble town with a small trading centre where salted herring was sold and crossings to Scania were operated.

In 1160 the Arch Bishop Absalon becomes an influential adviser to the king, Valdemar the Great. In the years that follow, the town grows tenfold in size, numerous churches and abbeys are founded. The town's economy blossoms thanks to the income from an enormous herring fishery trade, which provides larger parts of Catholic Europe with salted herring for Lent. Archbishop Absalon is the man who more than anyone can lay claim to be the founding father of Copenhagen. Since pirates had ravage the coast of Denmark for years and years, a fort was built outside Copenhagen to repel them. Absalon and Valdemar the Great used the victory as a launching-pad for the foundation of Denmark's Baltic empire.

Queen Margrethe l (1353-1412) was the most powerful woman in Europe during her reign 1387-1412. By marrying the Norwegian king, Hakon Magnusson, she became sovereign not only of Denmark but Sweden and Norway as well. And it was she who set the scene for the founding of the Northern Alliance, formalised as the Kalmar Union in 1397. After her son, the crown prince Olof died, she appointed king Erik of Pomerania to be her heir-at-law. He was crowned 1397, but Margrethe ruled till her death.

The king takes over Copenhagen

The geographic position of Copenhagen with the approach to the Baltic Sea and the wealthy northern German trading towns of the Hanseatic League, was very important. It provided Copenhagen with power and wealth, but it also meant threat and vulnerability. Over and over again the town was besieged and laid waste by the German traders. For a few years Copenhagen belonged to the Arch Bishop but when King Erik of Pomerania inherits the throne Copenhagen belongs to the Danish Crown.

Despite centuries of power struggles and warring the town grows increasingly rich. The Copenhageners do a brisk trade with friend and enemy alike. Foreign merchants come to the town. Craft guilds are established and a university is founded in 1478. By the time of Christian IV's coronation in 1596 Copenhagen is a wealthy and powerful city. Following the penetration of the Lutheran Church in Germany in 1517, the Danish population began to turn against the Catolic church and 1526 the Danish church split from Rome. Lutheranism became the country's official religion, and remains so to this day.

Kristian IV became king of Denmark and Norway already at the age of 11. During his reign 1588-1648 he lost parts of his kingdom to the Swedish crown. But despite this, Denmark became a prosperous country during his reign. Kristian IV founded a couple of cities, among them Kristiania, today's Oslo, the capital of Norway. He also established the first trading companies with sole rights to trade overseas.

The pagues of modern times

In the 18th century a serie of disasters stroke Copenhagen: first was the plague in 1711, then two fires ravaged the town in 1728 and 1795. The first fire started in a candle maker´s shop in Nørreport and destroyed 1,700 houses, the town hall and the university included. The circumstances around the big fire in 1795 were pitiable. The firemen couldn't find the keys to the pump-house and do their job, and as a result the spire of St Nikolaj Church was destroyed. However, the fires gave the city an opportunity to layout a new, grander town plan. In 1740 Kristian Vl moved into his new royal palace Christiansborg.

The 19th century begun with a great Battle of Copenhagen with the British navy in 1801, and the battle of 1807, when the enemy severely bombed the city. The "Kastellet" fortification turned out to be useless, so soon this kind of defence-lines were abandoned and ramparts of the city were open, allowing new housing to be built around the lakes.

After all wars, the bankrupt Denmark ceded Norway to Sweden in 1813. In following years, the city slowly recovered. Copenhagen invested in education - establishing free compulsory primary schools, and in science.

In 1849 Denmark became a democracy and the years to follow were fairly peaceful with a stable economic growth. In 1912, the first ocean-going diesel-powered ship M/S Selandia was built in the city shipyard. In 1932 the airplane traffic on the Kastrup airport (which was inaugurated in 1925) was way over 6,000.

On April 9, 1940 Hitler's troops invaded Denmark and Copenhagen. The occupation lasted till the end of the war. Germany moved 200,000 troops into Denmark, as the country was considered as a useful source of agricultural products. The Royal family with King Kristian X, Crown Prince Frederik and his wife crown Princess Ingrid refused to leave Copenhagen. Despite the best efforts of the Danish resistance and the secret evacuation of nearly 7,000 of the country's Jews to Sweden, Denmark resigned itself and was ruled by Berlin.

Denmark was liberated by British troops under the command of Field Marshall Montgomery on May 4, 1945. As of today, if you visit Denmark on this date you'll see candle lights in many windows to commemorate this very day.

The current queen, Margrethe II, was born shortly after the occupation began, on April 16 1940.

Into the 21st century

Copenhagen of today is one of the most dynamic cities in Europe and the second largest city in Scandinavia. With 1.1 million inhabitants in the Greater Copenhagen area (and more than 1,8 million when other close municipalites incounted), the city definitely holds the position as The Glittering Capital of this part of the world.

Copenhagen is one of the world's leading destinations for international conferences and congresses. Since the Øresund Bridge between Malmö and Copenhagen opened in 2000, the two cities offer more than 22.000 hotel beds. Scandinavia's largest conference centre, the Bella Center in the outskirts of the city, is well known for its international fairs and other arrangements.

In the 17th century king Kristian lV's vision was to turn the Øresund region into Northern Europe's leading economical and cultural centre. Today we're quite sure that he's sitting with a smile on his face on some royal cloud, absolutely pleased that his dream is about to come through.