The famous Danish freetown Christiania was founded in 1971 when a group of hippies took over abandoned military barracks and their surrounding along the Christianshavn canals and developed the area to an alternative society with own set of rules, independent of the government. 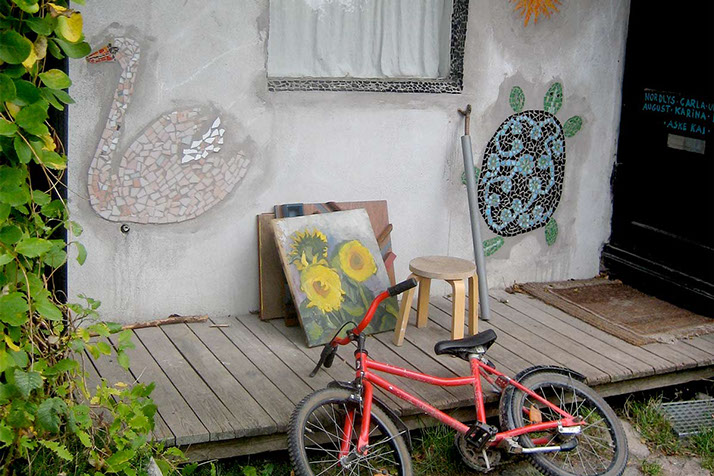 This social experiment that included collective ownership has over the years developed and established its semi-legal status. Today the enclave's user rights have been terminated by Danish state.

The commune today is partially self-governing, and its members pay taxes to the state, but it still applies own rules such as no cars, no stealing, no guns, no bullet-proof vests, no hard drugs. The stands on the famed slash infamous Pusher Street, where until 2004 one could buy hash openly at, are today gone, but cameras are still not allowed here. The ban on smoking in public spaces is not respected here, though.

Christiania has its own flag, and even currency, Løn (hence, the Danish crowns are accepted here). Many houses, built, painted and decorated by their first inhabitants, became historical objects.

The approx. 850 citizens of Christiania work as artisans (carpenters, blacksmiths), and the famous Christiania Bikes (bicycle trailers) are produced here. The inhabitants drive also meditation centra, cafés, restaurants, and a couple of music night clubs. The Solvognen Theatre Group has until 1983 performed happenings, also outside the Town.

Christiania is unique; one of its kind in the world, and for many people became a symbol of Danish liberal lifestyle.

The Town can be entered through the two main entrances.